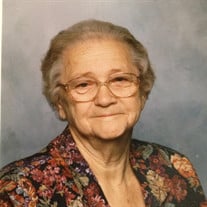 Allie Ruth Murdock, fondly known as “Bootsie” by family and friends, of Denton, passed away peacefully on January 1, 2015, at age 86. Born to Fred Otto Smith, Sr. and Sarah Emma Rhine Smith on August 31, 1928, Ruth was raised in Wise County, TX. After graduating from Decatur High School in 1945, Ruth met and married the love of her lifetime, Delbert Murdock. Ruth and Delbert married in Decatur, TX on September 14, 1946 and soon settled in Denton, where they raised their five children. Ruth is survived by an extensive family including: sister, Dot Thompson of Denton, son Bill Murdock and wife June of Krum, daughter Mary Ridgway and husband Reuben of Denton, daughter Betty Murdock Webb of Denton, son Jimmy Murdock and wife JoAnn of Krum, and son Steve Murdock and wife Karen of Aubrey. Ruth is also survived by fourteen grandchildren, eleven great-grandchildren and a multitude of nieces and nephews. Ruth was preceded in death by her husband Delbert Murdock and siblings Fred Otto Smith, Jr. of Sanger, Frances Christy of Alabama, and one great-grandson. She will be remembered for her beautiful smile, the extraordinary kindness, compassion, and selflessness she showed to so many throughout her life, as well as for the spirit she brought to family gatherings, especially through her gift of cooking. Visitation will be held at Denton Funeral Home Chapel, at 6-8 pm, Monday January 5, 2015. Services will also be held at Denton Funeral Home Chapel at 10:00 am, Tuesday, January 6, 2015. Interment will follow immediately after services at Roselawn Cemetery in Denton. On line condolences may be made for the family at www.dentonfuneralhome.net.

The family of Allie Ruth Murdock created this Life Tributes page to make it easy to share your memories.