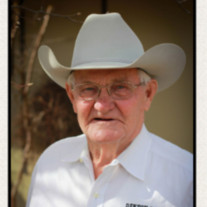 Alva Glendon Montya, also known as “Poppa Glen”, or “Monkeywrench”, of Ponder, Texas was welcomed into Heaven November 13, 2013. He was born August 6, 1937 in Indian Gap, Texas to John and Mamie Montya. He was a gifted man with many talents, but enjoyed working on heavy equipment and as a diesel mechanic. Joining the Navy at the young age of 19, he served proudly on the USS Ticonderoga as a fireman apprentice. He supported the youth by dedicating his time helping Justin Rodeo Company and Torti Rodeo Company at the North Texas High School Rodeo Association. He married Jo Ann Bowman Holloway on November 7, 1980. Together they were strong advocates of Alcoholics Anonymous and Al/Anon and founding members of Denton County Cowboy Church, where they have continued to serve their Lord by leading the Ramrod & Roses (Senior group). He was preceded in death by his parents, an infant son, Alva Glendon Montya, Jr., His sister, Lucille Almond and brothers, J.C. and Robert Erwin Montya. He is survived by his wife, two sons, Monty and Henry Montya, daughter, Wayla Lyles Luttrull and husband, Joey Luttrull, seven grandchildren, Brian Montya, Jason, Justin, Jennifer, Jacob Montya, Ryan and Reid Lyles, Lyndi and Lauryn Luttrull, one great grandson, Jeremy Newell, Jr., and numerous family members, “chosen” kids, and friends he loved unconditionally. Denton County Cowboy Church, 400 Robinson Rd., Ponder, Texas will host lunch and visitation Saturday, November 16, 2013, at 11:00 a.m. followed by a life celebration service at 1:00 p.m. He will be interred at Eakins Cemetery immediately following the service. In lieu of flowers, a memorial donation may be made in his name at Northstar Bank of Texas in Denton, Texas. Arrangements are under the direction of Denton Funeral Home.

The family of Alva Glendon Montya created this Life Tributes page to make it easy to share your memories.