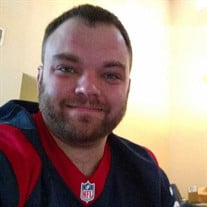 Andrew Galliger Jennings, 26, passed away in Spring, TX on Sunday, February 14, 2016. Andrew was born June 29, 1989 in Seminole, TX to Edwin Doyle and Samantha Kaye (Stovall) Jennings. He was a very active child with a huge curiosity. He could be frustrating but also wonderful in all the days of his young life. He was a graduate of Seminole High School. After a short break, he joined the US Army where he served a deployment in Iraq. After his discharge from the army, he graduated from Universal Technical Institute. His graduation announcement included a long list of accolades such as student of the course and perfect attendance. He loved cars and working with his hands. He had multiple vehicles that did not stay "stock" for long. He was a great man with a great mind. Andrew was survived by his mother, Samantha Jennings, and her husband, Richard Ovalle, of Corinth, TX; his maternal grandparents, Samuel Harrison and Brenday Kaye Stovall Jr, of Grand Prairie, TX; his brother, Alexander Jennings, of Odessa, TX; his sister, Alyssa Jennings, of Corinth, TX; his sister, Ashley Herrin and her husband Josh; his brothers, Austin Jennings-Hughes and Aaron Jennings-Hughes as well as his stepmother, Shauna Hughes, and her daughter, Avery Hughes, all of San Antonio, TX; 3 aunts and 5 uncles as well as there spouses; 14 cousins and their 3 children whom he considered as his niece and nephews; and a multitude of extended family and friends that will miss him dearly. Andrew was preceded in death by his father, Edwin Doyle Jennings, his paternal granparents, Edwin Ellis and Margarett Joyce Jennings, and his paternal uncle, James Jennings. A memorial service will be held at Denton Funeral Home on Saturday, February 20, 2016 at 4pm. Memorial donations can be made to the American Foundation for Suicide Prevention at http://afsp.donordrive.com/campaign/AndrewJennings

Andrew Galliger Jennings, 26, passed away in Spring, TX on Sunday, February 14, 2016. Andrew was born June 29, 1989 in Seminole, TX to Edwin Doyle and Samantha Kaye (Stovall) Jennings. He was a very active child with a huge curiosity. He could... View Obituary & Service Information

The family of Andrew Galliger Jennings created this Life Tributes page to make it easy to share your memories.

Andrew Galliger Jennings, 26, passed away in Spring, TX on Sunday,...