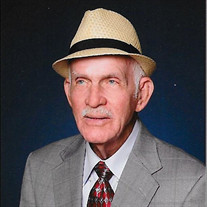 Arcle Hoyt Bonds, 85, of Sanger, Texas, died on Wednesday, September 17, 2014 from lung cancer complications. He was born to the late Bertie Mae Daniel and Ernest Eugene Bonds on July 17, 1929 in Fayetteville, Arkansas. He married the late Anna Mae Lasater Bonds in 1951, and they lived in California before relocating to Oklahoma in 1968. After the death of Anna, Hoyt married Jessie Thomas Ashby and moved to Sanger, Texas in 2004. Hoyt grew up in Keota and then Midwest City in Oklahoma, and after graduation in 1947, he served in the US Navy as Senior Chief Electronics Tech for 21 years until his retirement in 1968. Hoyt then worked for Greb X-Ray Company, in Oklahoma City, and finally for Duncan Regional Hospital in Duncan, Oklahoma, as a Bio-med Tech, until 1996. He was preceded in death by his first wife, Anna, and grandson, John Amos. He is survived by his wife, Jessie Thomas Ashby Bonds; his sister Mildred West of Midwest City, Oklahoma; his children, Joyce and Louis Leal; James and Linda Bonds; Cathy and J.R. Jackson; Laura and Davis Sanders; Nancy and Clint Whittle; Margaret and Mike Bryant, step-daughters, Zina Townley and Sherla Ashby; 12 grandchildren of his own, 5 grandchildren by marriage, 8 great grandchildren and 3 great-great grandchildren Hoyt was well loved by all for his kindness, generosity, sense of humor and big heart. He was an active member of Church of Christ of Sanger. He was a member of the Denton IOOF Lodge #82. He was also an accomplished gardener, rock hound, and birder. A memorial service will be held at Sanger Church of Christ on September 29, 2014, at 2 p.m. Hoyt's burial will be held at a later date in Ft. Sill National Cemetery in Elgin, OK. Whinery-Huddleston Funeral home in Lawton, OK with the assistance of Denton Funeral and Cremation Services will make arrangements for the cremation and interment. For those wishing to make a donation in memory of Hoyt, please consider the food bank of Sanger Church of Christ, P. O. Box 426, 400 Locust, Sanger TX 76266.

Arcle Hoyt Bonds, 85, of Sanger, Texas, died on Wednesday, September 17, 2014 from lung cancer complications. He was born to the late Bertie Mae Daniel and Ernest Eugene Bonds on July 17, 1929 in Fayetteville, Arkansas. He married the late... View Obituary & Service Information

The family of Arcle Hoyt Bonds created this Life Tributes page to make it easy to share your memories.