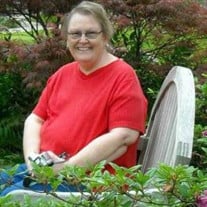 Beth Ann (Baughman) Hartsburg, 70, of Aubrey, TX, passed away on Sunday, June 7. Beth was born Beth Ann Ham on April 29, 1945 in Linton, Indiana to Ivan Ham and Mildred (Chaney) Baughman. After her father’s passing in 1953, Beth and her brother Jon, of Wills Point, TX, were later adopted by their step-father, Norvell K. Baughman, also of Linton. Beth graduated from Linton High School in 1963 with full honors. She met Richard C. “Richie” Hartsburg in 1961, and the two were married March 14, 1963. While Richard served 4 years in the Navy, the two lived in Norfolk, VA, Groton, CT, and New London, CT, before returning to Indiana. Their first son, Stephen Richard Hartsburg, was born May 17, 1966 at the Naval Base hospital in Groton, CT. The Hartsburg family moved to Texas in May of 1979, where they settled in Denton County. Beth is preceded in death by her parents Ivan Ham, Mildred Baughman, and Norvell Baughman. She is also preceded by her husband Richard and son Stephen Hartsburg. She is survived by her daughter Krista (Hartsburg) Offutt and son Timothy Hartsburg, both of Aubrey, TX. In lieu of funeral services, the family has decided to honor Beth’s wishes and hold a private gathering at the home to celebrate her life and memories. A donation site www.diabetes.org/Donate has been established at the American Diabetes Association, to donate in memory or honor of Beth Hartsburg. Arrangements are under the direction of Denton Funeral Home.

The family of Beth Ann Hartsburg created this Life Tributes page to make it easy to share your memories.