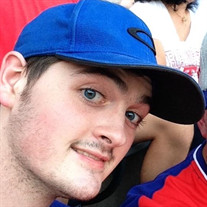 Obituary for Caleb Aaron Smith, Caleb Aaron Smith, age 17, born on January 6, 1999 in Warren, Ohio. Passed away from this life on September 21, 2016 in Dallas, Texas. He was preceded in death by his grandfather Don D. Pendergraft. He is survived by his mother Rebecca Jean Pendergraft and stepfather Kelly D. Pendergraft, father Justin Smith and stepmother Amber Smith, brothers’ Jacob Pendergraft (19), Liam Pendergraft (17), Andrew Smith (12), and sisters’ Allyson Pendergraft (10), Tatum Smith (9), and Grandmother Lynn Pendergraft. Caleb was a very special young man. He was quiet, kind, loving, independently-minded, lovably awkward, and very technically inclined. He was also well traveled, and as a very young child had spent time living abroad in Italy, thereafter he also had the opportunity to experience life in several states, like Ohio, Arizona, Oregon, Missouri, Illinois, and Texas. Caleb was curious about the world around him and had a desire to know the ‘how” and “why” things worked in the way that they did, probably explaining why he enjoyed watching hours of the television program How It’s Made. He also shared a deep respect and interest for criminal justice, and had plans of seeking a career that combined his love and talent for computer applications with the field of law enforcement. Caleb was an inspiration to those that were closest to him, in his later teen years he faced numerous medical challenges with bravery, humility, & grace. Often times providing an example of spiritual strength with an insightfulness and understanding that was beyond his years. He also enjoyed spending time with his family, hanging out with his grandmother, his beloved dogs; Raina, Bubba, & Star, video gaming, computer programming, woodcrafts, paintballing, and vacationing in the mountains of his favorite state Colorado. Memorial services in the memory of Caleb will be held on Saturday, October 1, 2016 at 10 am, at the Roanoke Church of Christ located at 305 Rusk Street in Roanoke, Texas. Any memorial donations can be received at the Roanoke Church of Christ from noon to 5 pm on Friday, September 30th, and from 8 am to 10 am on Saturday, October 1st. Caleb’s family would like to extend a special & enduring gratitude to the medical staff and caregivers at Children’s Hospital of Dallas, your loving care and compassion were invaluable and precious through vital moments in the life of our son.

Obituary for Caleb Aaron Smith, Caleb Aaron Smith, age 17, born on January 6, 1999 in Warren, Ohio. Passed away from this life on September 21, 2016 in Dallas, Texas. He was preceded in death by his grandfather Don D. Pendergraft. He is survived... View Obituary & Service Information

The family of Caleb Aaron Smith created this Life Tributes page to make it easy to share your memories.