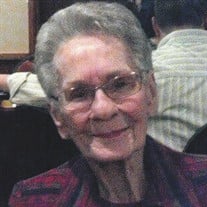 Dorothy Herring, beloved wife of John I. Herring, died at home in Denton, Texas on April 8, 2015. The youngest of four children, she was born January 25, 1923 near Roswell NM, to T. J. (Jack) and Eunice Deason. Visitation will take place Thursday, April 9 from 5:00 p.m. to 8:00 p.m. at Denton Funeral Home at 120 S. Carroll Blvd. in Denton, TX. Dorothy was an accomplished musician. She started piano lessons at the age of 6, violin lessons at the age of 8 and studied organ under Thelma Akin. She was a Charter member of the Roswell Symphony that started in the basement of the First Methodist Church under Glenn Cunningham, and continued as a member of the Orchestra for many years, and was instrumental in the organization of the Roswell Symphony Guild. Dorothy was organist for the First Presbyterian Church and Westminster Presbyterian Church, both in Roswell. She finally retired from the role of church organist in her 80s but continued to play for weddings and funerals. She graduated from Roswell High School in 1940, attended North Texas State University in Denton TX for one year, and married John on July 5, 1941. While John was overseas during WWII she took a temporary job in the Chaves County Clerk’s office which turned into a permanent career until John was transferred by Mountain State Bell Telephone Company to Clovis in 1967. While in Clovis, Dorothy worked as legal secretary for Attorney Lyle Walker. The couple returned to Roswell in 1973 from Clovis when John had the opportunity to transfer back to their home town. After their return she was legal secretary for Attorney Paul Snead and then for the law firm of Atwood & Malone. Throughout her adult life Dorothy loved and was very involved in politics. She remained true to her political beliefs. She is preceded in death by both her mother and father, her older brothers Charles Albert and T.J. (Jack) Jr., and one sister Lois Pettle. She is survived by husband John; five children; Paul Herring and his wife, Ann, of Roswell; Diana Lawrence and her husband, Mark, of Granite Falls, Washington; Beckie Mason and her husband, Justin, of Denton, Texas; Greg Herring of Boulder, Colorado; and Dan Herring, of Roswell. She is also survived by nine grandchildren; DeeAnn Mason Stone of Denton; Robert Herring and his wife, Shonna of Roswell, NM; Cecelia Coy Jones and her husband, Corey, of Little Elm, Texas; Paul Coy of Desoto, Texas; Carlyna Coy Dowell and her husband, Logan of Flower Mound, Texas; Philip Herring and his wife, Alessandra of Austin, Texas; and Jeffrey, Peter and Michele Herring of Boulder, Colorado . Additionally, there are 15 great grandchildren. At her insistence, her epitaph and the way she wants to be remembered is, “Thanks for inviting me, I had a wonderful time”. Please send memorials to the Roswell Symphony Orchestra , 1717 W. 2nd St. #205, Roswell NM 88201 or First United Methodist Church of Roswell, 200 N. Pennsylvania Ave., Roswell NM 88203. Arrangements are under the direction of Denton Funeral Home & Cremation Services.

The family of Dorothy Elizabeth Herring created this Life Tributes page to make it easy to share your memories.