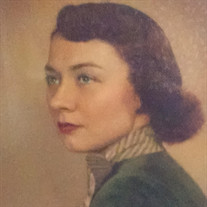 Elizabeth Pope Glaskowsky was born on January 13th, 1924 in Surginer, Alabama to Hubert Collins Pope and Amanda Elizabeth Alston. A memorial service will be held on Saturday, April 18th at 1:00pm at St. Barnabas Episcopal Church, 1200 N. Elm St., Denton, TX. She graduated as valedictorian of her class from Magnolia High School in 1941, and earned a Bachelor’s of Science in Chemistry and Nutrition at the University of Montevallo (formerly Alabama College for Women) in 1945. Upon graduation, Elizabeth took a U.S. Army Dietetic Internship at Brooke Army Medical Hospital, was commissioned a 2nd lieutenant, and assigned to Oliver General Hospital in Augusta, GA. She was promoted to 1st lieutenant in April, 1948. After she was relieved from active duty, Elizabeth returned to Alabama College as an assistant professor of nutrition until December, 1950 when she was recalled to active duty following the beginning of the Korean War. Following a one-year assignment to the 101st Airborne Division, Elizabeth was transferred in 1952 to serve as supervising dietician at Letterman Army Hospital in San Francisco, CA. She earned an early promotion to captain in June, 1953. In June of her first year at Letterman, Elizabeth attended a cocktail party held by a friend from the Stanford Business School. There, she met Nicholas Alexander Glaskowsky, Jr. a graduate student recently returned stateside from military service. Nick proposed on Valentine’s Day in 1953, and (despite the fact that he was a Yankee from Massachusetts) they were married the following June at the Chapel of the Presidio in San Francisco. They were married for 61 years. After Nick completed his doctoral program, Elizabeth resigned her Army commission and they moved to St Paul, Minnesota where Elizabeth worked as a dietician at the University of Minnesota Cancer Hospital. In 1961, they adopted their son Peter; in 1963, they adopted their daughter Alexandra. An accomplished seamstress, knitter, and crafter, Elizabeth balanced raising her children with many creative endeavors. In 1975, the family moved to Miami, FL where Nick became a professor at the University of Miami. Elizabeth continued her professional career as a dietician for Dade County Public Health and the University of Miami hospitals. Naturally, she also became an avid Hurricanes Football fan. When she and Nick were not traveling extensively in Europe, the Caribbean, and South America; Elizabeth enjoyed her work as a docent at the Villa Viscaya Museum, and faithfully served on the St. Thomas Episcopal Church’s Altar Guild for 23 years. Prior to retirement, Elizabeth was honored by inclusion in Who’s Who in America 50th Anniversary Edition and received a 50 Year Membership Award from the American Dietetic Association. She and Nick retired to Thomasville, AL in 1997 where they made many wonderful friends and renewed ties with Elizabeth’s family. After 10 years, they moved to Denton, TX to be closer to their grandchildren. After years of suffering from the effects of Alzheimer’s Disease, Elizabeth was finally freed of her physical being on April 9th, 2015. Elizabeth is survived by her husband Nicholas Alexander Glaskowsky, Jr. of Denton, TX; her son Peter Nicholas Glaskowsky of Carnation, WA; her son-in-law Clinton William Carter and daughter Alexandra Glaskowsky Leavell-Carter of Denton, TX; two granddaughters, Amanda Elizabeth Leavell and Mia Frances Leavell of Denton, TX, and her sister Mary Pope Reed of Thomasville, AL. In lieu of flowers, the family requests donation be made to the Alzheimer’s Foundation of America (http://www.alzfdn.org/). Arrangements are under the direction of Denton Funeral Home &

The family of Elizabeth Pope Glaskowsky created this Life Tributes page to make it easy to share your memories.

Elizabeth Pope Glaskowsky was born on January 13th, 1924 in Surginer,...