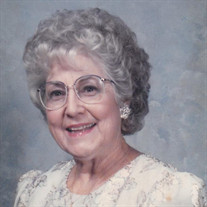 Beloved mother and friend, Estella Hayes, was called home to the Lord last Friday morning November 21, 2014 in Denton, Texas. She died of natural causes and lived a long rich full life. Her daughter, Marjorie was blessed to have her come live with her for 10½ years here in Denton. The Hayes family is from Orange County, CA and Estella will be interred there with her husband, Lt. Col. Willard Hayes, at the Riverside National Cemetery. Estella, or “Baba” as many of her friends and family called her, was the daughter of a grocer and grew up climbing over the fences of the movie studios in 1930’s Los Angeles. As a young woman she was a charter member Mrs. Edward G. Robinson’s Desert Battalion, which would travel to the California desert where General Patton’s troops were training and keep the soldiers company by dancing and talking to them. She married her Hamilton High School sweetheart, Willard Hayes, after WWII and they settled in Los Angeles and started a family later in the 1950s, having two children, Marjorie and James. Estella studied at Fullerton College and received her AA degree in Interior Design. She then worked as an assistant to Interior Designers, Frank Thibault and Ed Machado. She love creating a home with a warm atmosphere and was a fabulous cook, cookie maker and party giver. The Grindewald Ski Club parties she hosted were legendary and amazed her young children with the wild party games of the skiiers. She created tents and obstacle courses in her home on rainy days for her children to play in and exciting 4th of July fireworks celebrations. She made great Halloween costumes, was a wonderful seamstress, crafter and always cultivated a beautiful garden. One of her major gifts was assisting her children and everyone around her to find the joy of the moment. After her husband’s, death in 1984 she reinvented herself, finding new friends, especially her dear friend, Helen Grinkevich, another widow. She attended and contributed to the Placentia Presbyterian Church and lived in Placentia, California with her son James. She enjoyed going on camping and fishing trips and adventures with her adult children, to shooting ranges, Yellowstone Park and the wilds of Hell’s Kitchen, NYC. She was always game, rode on the back of motorcycles and wasn’t afraid of “getting in a pickle.” In 2003, she was bit by a mosquito and contracted viral encephalitis. She was in a coma for two weeks and needed 10 months of hospitalization to recover. The doctors finally released her into her daughter’s care giving her three months to live. Home health care brought Yvonne Jones, CNA, into Estella’s life. Yvonne became a new daughter to Estella and her humor, love and care brought Baba great joy. Estella loved living in Denton for the last 10 ½ years and could be caught rolling around the square, to Brahms, Sweetwater’s, Hannah’s, Recycled books or just a Sunday brunch on the back patio overlooking Marjorie’s garden and the greenbelt. Baba will be sorely missed but never forgotten, for the love she gave us will endure in our hearts. She is survived by her children Marjorie Hayes, James Hayes, Grandson Jesse Hayes, Yvonne Jones and nephews and nieces: Gary Ehrnman, Mary Ann Ehrnman, Ken Ehrnman, Patty Bloeser Parker, and Julie Bloeser Baker. And also an abundance of souls to whom she brought the gift of love: Helen Grinkevich, Torry Alpizar, Ollie Nash, Bonnie Dillingham. Her wonderful nurse Connie Stanley, physical therapist Jamie Hanska, nurse April Lillard, and hairdresser Karissa Sims. And of course, her adoring dogs: King of Bowie and Molly Mischief. Donations in Estella Hayes’ name can be made to the Alzheimer's Association http://www.alz.org/join_the_cause_donate.asp For more info contact: [email protected]

Beloved mother and friend, Estella Hayes, was called home to the Lord last Friday morning November 21, 2014 in Denton, Texas. She died of natural causes and lived a long rich full life. Her daughter, Marjorie was blessed to have her come... View Obituary & Service Information

The family of Estella Hayes created this Life Tributes page to make it easy to share your memories.

Beloved mother and friend, Estella Hayes, was called home to...