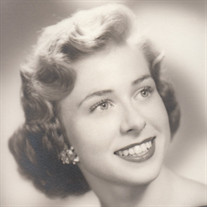 Frances Tims Magown was born on Saturday, December 11, 1937, in Vernon, Texas, to Vergil Elbert Tims and Georgia Castlebury, and passed away on Thursday, July 17, 2014 in Denton, Texas. She was the youngest of four children, with two sisters and a brother, who was the oldest child. They grew up in her early years in Abilene, Texas. Later, they moved to Dallas, Texas. After graduating from Highland Park High School, she went to Southern Methodist University and while a student there, she met Robert William Hill. They married on June 14, 1957. They had four sons and raised their sons in Richardson, Texas. After Robert completed his M.D. and residency, they moved to Bonham, Texas, where they continued to thrive as he built his medical practice. Frances and Robert were divorced in 1972 and after that, she married Lionel Hallonquist. He passed away in 1984 and she married Lloyd Magown, Sr. a few years after that. She was widowed a second time when Lloyd died from complications from surgery in 1997. Since then, she lived in Denton, Texas to be nearer to her sons, who spent time with her until she passed away. She loved music and instilled that into her four sons. She was also gifted with an incredibly beautiful soprano voice and sang at various local functions with her husband, Robert. Frances could have had a wonderful career with her beautiful soprano voice, but she chose instead to devote herself to raising her sons. She passed on to them a deeply-rooted compassion for others and scrupulous honesty. She was very outgoing and loved children. Frances was preceded in death by her beloved parents, Vergil Elbert Tims and Georgia Castlebury Tims; her brother, Patrick C. Tims; and her son, Robert Tims Hill. She is survived by her sons, William Francis Hill of Krum, Texas, Russell Bradford Hill of Austin, Texas, and James Donovan Hill of McKinney, Texas; daughter-in-law Katherine Rene Hill of Austin, Texas, daughter-in-law Geralyn Hill of Garland, Texas; grandson Russell Blake Hill of Lewisville, Texas; granddaughters Cacie Tims Hill of Garland, Texas, Isabella Rene Hill and Kylie Brooke Hill of Austin, Texas; great-granddaughter Kennedi Kaye Hill of Denton, Texas; sisters Georgann Filak of Houston, Texas and Janie Moore of Sand Springs, Oklahoma; and nieces and nephews: children of Pat and Jane Tims: John, Andrew, Heather, and Holly; children of Janie and Dan Moore: Mary, Jay, and Margaret; children of Jerry and Georgann Filak: Stephanie, Blanten, and Caroline. A memorial service (with reception) will be held on Saturday, August 2, 2014 at 11:30 am at First Presbyterian Church, 1002 Fox Avenue, Lewisville, Texas. If you desire to send floral tributes, then please send them to the church at the address above and make note that they are for Frances Magown’s Memorial service. In lieu of flowers, the family requests you donate to your favorite charity in memory of Frances Magown.

Frances Tims Magown was born on Saturday, December 11, 1937, in Vernon, Texas, to Vergil Elbert Tims and Georgia Castlebury, and passed away on Thursday, July 17, 2014 in Denton, Texas. She was the youngest of four children, with two sisters... View Obituary & Service Information

The family of Frances Magown created this Life Tributes page to make it easy to share your memories.