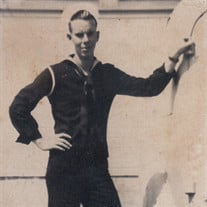 Fred William Brown, Jr. Born July 23, 1930 to Fred Brown, Sr. and Louise O’Reilly, 2nd of 9 children, passed away October 15, 2014. He is preceded in death by parents, sisters; Christine, Louise, Pauline, Cleo and brothers; Leon and Leo, his daughter Donna and grandson Jordan. Fred enlisted in the Navy, July 25, 1947, Deckhand – Stationed at Skaggs Island on a tug boat in Sonoma, CA. Discharged April 26, 1950, hitchhiked home from CA, “spent 3 days trying to get a ride out of Barstow”. “Found” and married Mina Lee (Wheeler) Wiles on July 4, 1955 – daughters, Linda Ann Wiles, age 6 and Donna Jean Wiles, age 2. He and Mina didn’t have other children together but they helped raise a niece and a granddaughter. They had 6 grandchildren and (he expressed amazement each time one of them was born, saying, “I don’t know how we did it, but we have the prettiest baby in the nursery ”AGAIN!)”, 5 great grandchildren and many nieces and nephews. Memorial Service, Saturday, October 18th, 2014 at 2:30 p.m. at Denton Funeral Home Chapel. Officiating, Chaplin Mike Shillings. Arrangements are under the direction of Denton Funeral Home. On line condolences may be left for the family at www.dentonfuneralhome.net

The family of Fred William Brown Jr. created this Life Tributes page to make it easy to share your memories.