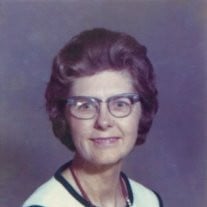 Geraldine Faye Forrester passed away on November 6, 2013. She was born on March 24, 1918, in Happy, Texas, to Levi Dixon Lockett and Luna Davis Lockett, the baby in a family of nine children. Gerry graduated from West Texas State in 1940, one year after marrying Frederick I. Forrester of Morse, Texas. Before moving with her family to California in 1954, she taught first and second grade in several small communities in the Texas Panhandle. In South San Francisco, California, she taught first grade for more than 30 years, eventually becoming a reading specialist. She loved teaching children how to read. After retiring and moving to Denton, Texas, she and her husband organized the English as a Second Language ministry at the First Baptist Church of Denton, working with international students from the University of North Texas, their spouses and children. For several years she and her husband continued this ministry for the Southern Baptist Home Mission Board in the Pacific Northwest, primarily teaching English Language skills to immigrants from Eastern Europe. Gerry taught Sunday school for adults for more than 50 years at various Baptist churches including First Baptist of San Francisco, Foothill Baptist Church in Cupertino, First Baptist Church of Denton and at Wilshire Baptist Church in Dallas. Her husband, Frederick Forrester and son, Bill Frank Forrester, preceded her in death. She is survived by her son Robert Forrester and his wife, Jan Forrester, of Garland, Texas, grandchildren Kristen Streater of Richardson, Texas, Matthew Forrester of Gibsonton, Florida and Heather Forrester of Austin, Texas, three great grandchildren, Clark and Sarah Streater and Kevin Forrester and several nieces and nephews. A memorial service will be held, Wednesday, November 13 at 10:30 a.m. at Wilshire Baptist Church (McIver Chapel). Officiant will be Dr. George Mason. A graveside service was held at Lieb Cemetery in Morse, Texas, November 9, 2013 at 2:30 p.m. The family request in memory of Geraldine, memorial donations be made to the Greif and Loss Center, Wilshire Baptist Church at 4318 Abrahams Road, Dallas, Texas 75214. Arrangements are under the direction of Denton Funeral Home in Denton, Texas.

Geraldine Faye Forrester passed away on November 6, 2013. She was born on March 24, 1918, in Happy, Texas, to Levi Dixon Lockett and Luna Davis Lockett, the baby in a family of nine children. Gerry graduated from West Texas State in 1940,... View Obituary & Service Information

The family of Geraldine Faye Forrester created this Life Tributes page to make it easy to share your memories.

Geraldine Faye Forrester passed away on November 6, 2013. She...