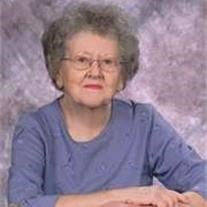 Harriett Marie Haas passed away on Saturday, August 17, 2013 at the age of 89 at Denton Good Samaritan Village, her residence since 2007. Harriett Marie Carter was born on April 18, 1924 in Marshalltown, Iowa, the daughter of Clarence R. and Ruth M. Carter. She graduated from high school in Oskaloosa, Iowa in 1942 and moved to Des Moines, Iowa where she worked for the K.L. Pearce Company until 1949. She married Arthur D. Haas on June 28, 1947 and over the next 20 years traveled with him and their four daughters as a military family to many states, as well as overseas to Panama. Once settled in Denton, Texas in 1970, Harriett became an active member of First United Methodist Church, serving in the United Methodist Women and the Chancel Choir for many years. As part of R.S.V.P. (Retired Senior Volunteer Program), Harriett served some 17 years at the Clothing Room at Fred Moore School. She was also a member of the Association of Christian Women, and a primary organizer and long-time member of the quilting group that began meeting in homes and later at FUMC-Denton. Also a member of the Denton Quilt Guild, Harriett had a passion for quilting - her handiwork is a testament of that passion that will last long into the future, with many quilts given to friends and family, donated to orphanages and hospitals, and sold at charity fundraisers. Harriett also loved music and singing, beginning in high school when she played the violin in the local Methodist Church orchestra. She sang in church choirs in many of the cities in which she lived, and participated in special musical groups such as the Joy Singers" and the chapel choir at Good Samaritan Village. Harriett was a wonderful mother, homemaker, seamstress, and a good friend to many - she will be greatly missed. Harriett was preceded in death by Art, her husband of 61 years, her brother Clarence "Tex" Carter, Jr. and his wife Harriet, and her half-brother Clair Carter and his wife Norene. She is survived by: daughters Pamela (Greg) Kerndt of Waukon, Iowa, Denise (Tom) Griffith of Saginaw, Texas, Linda Haas of Floyd, Virginia and Connie (Jack) Harris of Corpus Christi, Texas; nephews Jeff (Pam) Carter of Plymouth, Minnesota and David Carter of Ames, Iowa; sister-in-law Beatrice (Gene) Schmidt of Encinitas, California; grandchildren Shelley (David) Collins, Chris Kerndt, Lisa (Zack) Schwab, Ben Kerndt and Lindsey Kerndt; great-grandchildren Bailey and Mason Collins, and Wyatt and Carter Schwab. A memorial service in celebration of Harriett's life will be held in Cole Chapel of First United Methodist Church, 201 South Locust, Denton, Texas on Wednesday, August 21 at 2:00 P M. In lieu of flowers, the family suggests donations to United Methodist Women of First United Methodist Church or a charity of your choice. Arrangements are under the direction of Denton Funeral Home.

Harriett Marie Haas passed away on Saturday, August 17, 2013 at the age of 89 at Denton Good Samaritan Village, her residence since 2007. Harriett Marie Carter was born on April 18, 1924 in Marshalltown, Iowa, the daughter of Clarence R. and... View Obituary & Service Information

The family of Harriet Haas created this Life Tributes page to make it easy to share your memories.