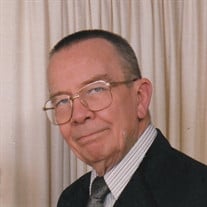 Hugh Kirkpatrick passed away on Monday, July 14, 2014 in Denton, at the age of 89. He was born in McKinney, Texas on August 12, 1924 to Hugh Lee Kirkpatrick and Martha Isabella (Patsy) Kirkpatrick. Hugh received his B.A., his M.A., and his PhD in English at the University of North Texas, where he taught from 1961 until his retirement in 1987. While at the University, he was also the Assistant Dean of the Graduate School from 1965 to 1987. Hugh was in the United States Army’s 10th Mountain Division, stationed in Europe during WWII. He married Lina Briggs on August 27, 1947 and together they shared a very full and colorful life. From 1952 until 1958, they lived in Beirut, Lebanon; Tehran, Iran; and Port-au-Prince, Haiti, while Hugh taught English for the State Department. Hugh was a man of many interests. Academically, his specialty was in Middle English. He presented many papers on the subject, especially the Bob-Wheel stanza in Middle Scots poetry. Hugh was an avid amateur musician. He played the organ and piano, was a choral singer, and was a founding member of the Denton Bach Society. At home, Hugh was also an excellent baker and cook. One of the couple’s favorite activities was spending their summers at the family cabin, outside Allenspark, Colorado, where they would host family and friends. Hugh and Lina had four children: Hugh Charles Kirkpatrick, Paul Kirkpatrick, Tom Kirkpatrick and Alice Kirkpatrick Sims; three grandchildren: Gary Sims, Jr., Zoe Kirkpatrick and Hanna Kirkpatrick, and one great-grandchild: Hugh James Sims. Hugh was preceded in death by his parents and his eldest son, Hugh Charles Kirkpatrick. He will be remembered as a loving and caring father and husband, whose unfaltering devotion to his family will be treasured always. A gathering of friends and family will be held at a later date.

Hugh Kirkpatrick passed away on Monday, July 14, 2014 in Denton, at the age of 89. He was born in McKinney, Texas on August 12, 1924 to Hugh Lee Kirkpatrick and Martha Isabella (Patsy) Kirkpatrick. Hugh received his B.A., his M.A., and his... View Obituary & Service Information

The family of Hugh Kirkpatrick created this Life Tributes page to make it easy to share your memories.