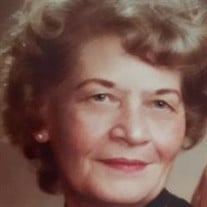 Irma Lucille (Wilmot) McCoy was born June 24, 1926 in Red Cloud, Nebraska to Miles Henry Wilmot a farmer and Gladys (Merrill) Wilmot. The middle child of three girls she grew up during the Great Depression and WWII. She lived in different areas during her childhood and fondly spoke of her years when finishing High School in Denver, Colorado. It was during this time she met, fell in love and married Andrew Vanuch, an active duty Staff Sargent in the US Air Force. Shortly after marrying Andy, Irma worked as a dental technician. Due to Andy’s active status they moved several times finally ending up in Las Vegas, Nevada in September of 1949 where Andy finished his active duty at Nellis Air Force Base. It was at the Nellis Hospital where Irma gave birth to their daughter Cindy Vanuch-McCoy. The couple bought property in N. Las Vegas, building their own home and lived there until divorcing in 1958. Irma and Cindy began a new life together where Irma worked several years as a carhop at two of the city’s iconic drive inns; Sill’s on 5th St. and Charleston Blvd. and The Blue Onion on E. Fremont St. when both were still dirt roads. It was at Sill’s when Irma met, fell in love and married Jerry McCoy, a union plumber by trade. In 1960 Irma gave birth to their son Brett. Jerry’s parents; M.S. “Mac” McCoy, President of the Carpenters Union and his wife Helen were also longtime Las Vegas residents having come to the valley on December 8th, 1941. Shortly after arriving, Mac built their family home on the corner of Charleston Blvd. and Rancho Dr. at a time when the entire Las Vegas community was less than 8,000 in population. After several years of marriage Jerry and Irma purchased a half acre in the NW and built their family home as well. During the years leading up to this, Irma worked in several different locations as a waitress, including several years at another iconic restaurant; Papa Gars and then later at Charleston Heights Bowling Alley. Between Sill’s and Papa Gars, Irma met several of the city and state’s upcoming political leaders including current United States Senator Harry Reid, retired United States Senator and Governor of the State of Nevada, Richard Bryan, Las Vegas Mayor Oran Gragson, District Attorney Rex Bell and many others. Irma and Jerry divorced in 1989 and Irma once again started a new life for herself. She became an insurance agent and owned her own business; ILM Insurance Company. She also worked part-time in the cafeteria where one of her grandchildren was attending elementary school. Irma was always active and enjoyed working around her home and property. She loved sewing, crocheting, cooking, gardening and her favorite of all; playing Bingo sessions where she also had many friends. In her later years, Irma spent time living with both of her children. It was after spending time with each that she decided to move into an assisted living facility. Cindy found a wonderful place by the name of Willow Bend Assisted Living and Irma came to call it her home. Recently coming down with pneumonia Irma was taken to the hospital and shortly after, hospice was required. Willow Bend allowed her to return for her final days so she could be comfortable and be at home. On June 24th, 2016 and on her 90th birthday while surrounded by her children and loved ones, Irma left this life to be with our Lord. Irma was preceded in death by her parents, Miles and Gladys, son-in-law Mel Lange, older sister, Iva Ward and her younger sister, Arlene Butler. She is succeed in life by her daughter, Cindy Lange and her children Christopher Lange (Kelli) and Melissa Lange McDonald (Wesley) and her son Brett McCoy (Laura) and their son, Jason McCoy as well as her niece, Cece Ward and great Nephew, Patrick Ward. Condolences may be left for the Family at: www.dentonfuneralhome.net

Irma Lucille (Wilmot) McCoy was born June 24, 1926 in Red Cloud, Nebraska to Miles Henry Wilmot a farmer and Gladys (Merrill) Wilmot. The middle child of three girls she grew up during the Great Depression and WWII. She lived in different areas... View Obituary & Service Information

The family of Mrs. Irma Lucille McCoy created this Life Tributes page to make it easy to share your memories.