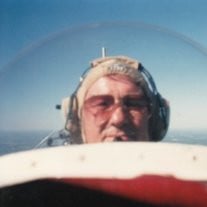 Jerry Dale Pockrus 73, born August 21, 1940 to Nelson and Naomi Pockrus in Bartonville, Texas, passed away Sunday, November 10, 2013. Jerry lived in the Justin area all his life. He attended Justin schools and owned and operated Jerry’s Garage for 20 years. He retired from Jack Cooper Transport in 2005, after 25 years, and was a member of the Teamsters Union. Jerry ran “Jerry’s Aircraft Service” from the hanger in his backyard for 20 years. He loved flying and had lived on the airport for 28 years. He bought ugly airplanes and made them pretty to fly again. He has owned over 60 airplanes in the past 30 years. Jerry spent his life living and loving his family, friends and airplanes. He belonged to various airplane clubs and was a member of the local and national chapter of Antique Airplane Association. Jerry had been a hunter and fisherman since boyhood. He and his cousin Weldon grew up together, fishing all the tanks around Argyle and Justin and hunting the fields for rabbits, with their 22 rifles. Jerry was a loving husband, father, son, brother and friend to many. He will be missed by all. Jerry was preceded in death by his daughter, Tammy Lynn Pockrus, mother, Naomi “Kitty” Pockrus and father, Nelson Pockrus. He is survived by his wife, Barbara Pockrus; son, Jerry Dean Pockrus; daughter, Connie Dabney and husband, Benny; son, Billy Pockrus and wife Penny and his children’s mother, Drue Pockrus. Step-sons; Mike Dalton, Ted Dalton and Brian Dalton. Sister, Carolyn Carrington; brothers; Mike Pockrus and wife, Julie, Pat Pockrus, Dan Pockrus and wife, Donna. Grandchildren; Blane Dabney, Myka Koelzer, Kymber Pockrus and Gentry Pockrus. Step-grandchildren Tucker Dalton, Allie Dalton and Evanne Dalton. Great-grandchildren; Dewey and Graysen Koelzer, Amber and Ian Dabney and many nieces and nephews. There will be a Celebration of Jerry’s Life on Sunday, November 17, 2013 at 1:00 p.m. at Al Hilton’s hanger at Clark Airport in Justin, Texas. In lieu of flowers, the family requests donations be made to the American Cancer Leukemia and Lymphoma Society, in Jerry’s name. Arrangements are under the direction of Denton Funeral Home.

The family of Jerry Dale Pockrus created this Life Tributes page to make it easy to share your memories.