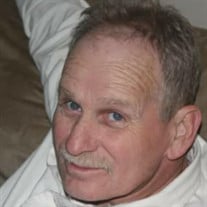 Jimmy Allen Balch, 65, of Blue Mound, Texas passed onward Saturday, May 28, 2016 in Denton, Texas. Born in Fort Worth, Texas on November 8, 1950 to George Eldridge and Leola Balch, before continuing his life in Tarrant County, Texas. Jimmy is survived by his father George E. Balch of Chireno, TX; sister Linda and Steven Schneider of Conroe, TX; his son Jimmy and Brandi Balch of Northlake, TX, and his two daughters Tammie and Craig Duhon of Lumberton, TX and Melanie and Michael Ballew of Blue Mound, TX; nephew Daniel Shawn Sudnow of Conroe, TX. His grandchildren include: Lauren Balch and fiancé Jeremy Clanton, Jay Balch, James Ryder Balch, Alissa Duhon, Ashlen Cheyenne Duhon, Christopher Ballew, Savannah Ballew, Nicholas Ballew, and great-granddaughter Paisley Clanton. Jimmy has been received in death by his mother Leola Balch. Jimmy was a carpenter by trade, a simple man. He enjoyed the company of his children and grandchildren. His spare time was occupied by spending time outdoors, watching western films, and working with his hands. He had a special admiration for the high mountains of Colorado where he lived for a period of his life. Most importantly, Jimmy was an advocate for his family and loved ones. He lived in the home of his daughter Melanie and watched as her children grew, served as a fishing partner for his son Jimmy, and was the best home-repairman in the state of Texas to his daughter Tammie. Jimmy cheered on sports events and school achievements of his grandchildren with excitement and pride. Jimmy will be fondly remembered and warmly missed as a son, brother, father, uncle, and grandfather. In lieu of flowers, the family is requesting donations be made to the Blackjack Cemetery Perpetual Care Fund at 217 CR 392, Nacogdoches, TX 75961.

The family of Mr. Jimmy Allen Balch created this Life Tributes page to make it easy to share your memories.