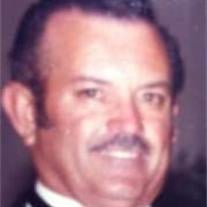 Jose Guadalupe "Lupe" Irlas, Sr., born November 13, 1931 to Antonio and Victoria Irlas in McAllen, Texas, passed away Friday, August 30, 2013 in Denton Visitation will be Tuesday, September 3, 2013, 10:00 AM - 12:00 PM. Funeral Services will immediately follow visitation in the Denton Funeral Home Chapel, 120 S Carroll Blvd., Denton, Texas 76201. Burial will be in Sanger Cemetery . Lupe spent many hours on the road, as a truck driver, but called Sanger, Texas, home. He was blessed with a large and loving family and enjoyed spending time with his many grandchildren and great-grandchildren . Preceded in death by his wife, Ema Trevino Irlas, son, Antonio, daughter, Norma and grandson, Michael; Lupe is survived by his three sons; Jose, Daniel and Carlos, daughter; Diana; grandchildren and great-grandchildren. In lieu of flowers, the family suggests donations be made to the American Diabetes Association . Arrangements are under the direction of Denton Funeral Home.

The family of Jose Lupe Irlas, created this Life Tributes page to make it easy to share your memories.