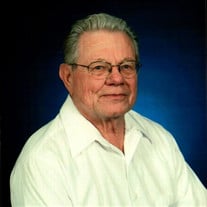 Lawrence Rodney “Rod” Barthold, Sr. aged 85 passed away peacefully on March 22, 2019. He was born in the city of Krum, Texas on December 28, 1933 to Herbert C. Barthold and Marjorie Knox Barthold. Visitation will be held on Friday, March 29, 2019 from 6-8 p.m. at Denton Funeral Home and his funeral will be conducted on Saturday, March 30, 2019 at 10 a.m. at Krum First United Methodist Church. Interment will follow directly at Krum Jackson Cemetery. Rod was known for his positive, generous, fun loving spirit. He loved his children and friends beyond measure. Rod never met a stranger. He was always looking for ways to uplift everyone even on his not so good days. Rod will be missed by his family, friends and community. At this time, our world is a little less bright because of his passing. However, we know by following his example, our memories of him will guide us to do the right things. His early years were spent on the family farm located on the outskirts of the city of Krum. He had 3 sisters: Mamye Kathleen (deceased), Susan Barthold Dodd and Jane Barthold Trevino. He described his childhood as happy and idyllic. He graduated from Krum High School in 1952. After graduation, he worked the family farm and attended the University of North Texas. In 1954, he married Nena Bell Garrett, they lived in and around Denton and Krum for 12 years while having 3 children: Lawrence Rodney Barthold, Jr. (deceased), Linda Barthold Gillespie and Angela Barthold Estes. Rod and Nena believed in education and were very proud all three children earned college degrees. In 1956, he began his work career with Temco. This company grew to become the well-known Lockheed Martin of today where he retired after 40 years of employment. One of the highlights of his job was working on various space programs. He was extremely enthusiastic about waking up his children to see the launches and moon walks; explaining equipment his employer made to enable these courageous individuals to live beyond our atmosphere. In 1966, Rod and Nena moved the family to the big city of Arlington. They enjoyed many family outings to see the local baseball team and Six Flags Over Texas. After his retirement in 1996, Rod and Nena returned to live in Krum. They purchased his mother’s childhood home locally known as the Knox House. The home has given this family almost 101 years of happy, loving memories. After Nena’s death in 2001, he found another heart-mate and married Bonnie Clardy on April 17, 2004. Together they spent his remaining years sharing many common interests including the love of traveling, dining, and meeting with friends in fellowship. Rod’s later adult life was spent creating meaningful lifelong friendships, volunteering for many organizations and leading non-profit organizations. He was an active member of the Krum First United Methodist Church; delivered Meals-On-Wheels; helped develop the City Park West; was a founder of the Krum Society of Historic Preservation and Krum Heritage Museum; and was an active member of the Lions Club. He was a member of the Masonic Lodge for 50 years and last living Master Mason of the “old” Masonic Lodge of Krum. Preceded in death: Wife of 46 years, Nena Garrett Barthold; son, Lawrence Rodney Barthold, Jr.; wife’s daughter, Mary Clardy Beshero; mother, Marjorie Wanda Knox; father, Herbert Clarence Barthold; sister, Mamye Kathleen Barthold; brother-in-law, Fermin Trevino. Survivors: Wife, Bonnie Clardy Barthold; daughter-in-law, Kathy Gambrell Barthold; daughter, Linda Barthold Gillespie and husband Brian; daughter, Angela Barthold Estes and husband Cliff; sister, Susan Barthold Dodd and husband Denney; and sister, Jane Barthold Trevino. He is also survived by his wife’s children, whom he loved dearly, Dean Clardy and wife Tanya; and Melanie Clardy Herd and husband Dennis. Grandchildren: Bryan Barthold, Brooke Barthold George, Lisa Gillespie, Jamie Gillespie Martin, Shawn Gillespie, Paige Gillespie, Ally Clardy Buckminster, Casey Clardy Scott, Ben Herd, Katelyn Herd Crowell, Bonnie Beshero Mondragon, and James Beshero. He currently has 18 great grandchildren. As many people know, Rod was an animal lover. His beloved canine, Gabby, will forever miss her favorite person. Rod enjoyed flowers. However, he would be honored if people want to give donations to the Krum Heritage Museum or the Krum First United Methodist Church.

The family of Lawrence Rodney Barthold created this Life Tributes page to make it easy to share your memories.