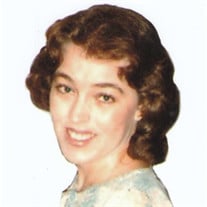 Lisa Kay Ford Frey, 58, of Denton, Texas left her earthly body and stepped into her beloved Lord and Savior's welcoming arms on November 27, 2014. There will be a Memorial Service and a Celebration of the life Lisa lived as she followed and served Jesus Christ at 10:30 a.m. on Saturday, December 20, 2014 at Towne North Baptist Church located at 526 Hercules Lane, Denton, Texas. If Lisa touched your life in any way, please join us in her Victory Celebration. She was born in San Angelo, Texas on December 7, 1955 to Merle Bernard and Elizabeth Pauline Mixson Ford. She graduated from San Angelo Central High School in 1974 and was employed by GTE who transferred her to Sulphur Springs, Texas where she met and married David Henry Frey on June 25, 1983. Lisa became a full time homemaker while raising her stepdaughter, Carrie, and being blessed with three more daughters, Rachel, Maribeth, and Abigail. Lisa's greatest passion in life was serving her Heavenly Father, especially in the Women on Missions ministry at Towne North Baptist Church, which she led for several years. Second to loving God was the way she loved her family and the unsaved; Lisa always put others before herself. She is preceded in her heavenly homecoming by her father, Merle Bernard Ford; her brother, Bernard Howard Ford; and sister, Darla Jo Ford. Lisa is survived by her husband of 31 years, David Frey, of Denton, Texas; daughters, Carrie Louise Frey of Lewisville, Rachel Nicole Frey of Denton, Mary Elizabeth Frey of Prosper, and Abigail Louella Frey of Katy, Texas; mother, Elizabeth Pauline (Polly) Ford of San Angelo; sisters, Judy Lynn Ford Leone (Tony) of Anderson, South Carolina, and Paula Sue Ford Kennemer (Aubrey) of San Angelo; as well as several nieces and nephews on both sides of the family who will miss their aunt until they see her again when joyfully reunited. Lisa absolutely loved and adored her four grandchildren, Nolan David McMeans, Lucas Scott McMeans, Zoey Alexa McMeans, and Nicholas Henry Serrano. Arrangements provided under the direction of Denton Funeral Home & Cremation Services.

Lisa Kay Ford Frey, 58, of Denton, Texas left her earthly body and stepped into her beloved Lord and Savior's welcoming arms on November 27, 2014. There will be a Memorial Service and a Celebration of the life Lisa lived as she followed and... View Obituary & Service Information

The family of Lisa Kay Frey created this Life Tributes page to make it easy to share your memories.