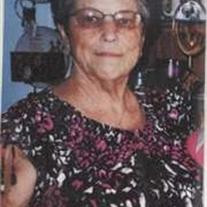 Marie Butler, 73 of Krum, TX passed away in Denton on Friday, October 5, 2012. She was born on September 16, 1939 in Proctor, OK to Coley and Indiana (Young) Ferguson. Marie was married to Coy Butler on February 20, 1957. She loved kids and watched numerous babies after her retirement from the Denton State School. She was a loving housewife and Grandmaw. A visitation will be held on Monday, October 8, 2012 from 12-2pm at the Denton Funeral Home. A funeral service will begin after the visitation at 2pm. Burial will follow at Jackson Cemetery in Krum, TX. Gary Sweatman will officiate. Survivors include her husband, Coy Butler of Krum; daughter, Phyllis and husband, Donald Newman of Krum; brothers, Jay Ferguson of Tahlequah, OK, Roy Ferguson and Carl Ferguson both of Proctor, OK; sister, Wanda Sue Schmidt of Collinsville, OK; grandchildren, Greg Newman, Michelle Newman Bounds, and Regina Newman all of Krum; numerous great-grandchildren; and many other family members and friends. She was preceded in death by her parents; sister, Dorothy Ferguson; and great-granddaughter, Emma Newman.

The family of Marie Butler created this Life Tributes page to make it easy to share your memories.

Marie Butler, 73 of Krum, TX passed away in Denton on Friday,...