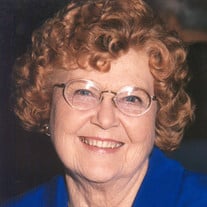 Mary Evalyn Naughton, of Denton, TX, passed away peacefully on Friday July 26, 2019. “Evalyn” as she was known, was born in Sperry, Oklahoma to the late Roy Yandal and Mary Elizabeth “Molly” McClure on November 26, 1930. In high school, she developed a love for basketball, playing with her sisters Thelma, Faye and Royce. When her sister Thelma married a professional baseball player named Joe Frazier, she became enamored with baseball and the “Cardinals,” and in time, the “Texas Rangers” became her team. Soon after high School, while working at Tulsa Power and Light, she met a young airplane mechanic through a blind date. Willard B. “Jack” Naughton was beginning a new career as a Professional Flight Engineer with American Airlines. It was a whirl-wind romance that began an adventure of a lifetime that included travel all over the world. They married on January 14, 1951, and by the fall of 1957 they had welcomed three children, Judith Ann, Jack Russell and Lori Sue into their lives. As their family was growing, so was American Airlines; and in 1960, Jack moved the family to Texas to a new base in Dallas. Even though she had a house full, Evalyn was an industrious and creative person. Sewing was just one of her many talents, sewing curtains, upholstering furniture and making her daughters’ clothes. She was always willing to make costumes for plays and theater productions. She once created a life size donkey and sheep for a Christmas Cantata. She was a quick study for wallpapering, painting and all things involved with making her home warm and inviting to all. One of her dreams was a “place in the country” where her kids could experience nature and farm life. In 1963, they found an old house on the outskirts of Denton and began living that dream. Soon, there was 4-H, FFA, Sheriff Posse Play Days and Trail rides! Evalyn loved to have family gatherings and parties. The “Oklahoma bunch” and Kansas family would come to Uncle Jack and Aunt Evalyn’s for summertime reunions and Texas fun. The best memories were made with those summer trips. In 1968, if life wasn’t busy enough, a little surprise came their way with the birth of their fourth child, Barrett Blake. The family grew as the kids married, and soon grandchildren shared in their fun. The first were twins, Katherine Lee and Kyle Nicholas Collins, followed by Benjamin Chase, Joshua Scott and Sawyer Elizabeth Camillo. Soon after Sawyer, came the first great grandchild, Destiny Jillian Lee Collins, and later, Cooper Michael and Carter Nicholas Grote. Evalyn had a fun and lively personality and was given the gift of Hospitality. Everyone felt welcome at her home. Over the years, their “airline” family grew in Denton, and there would be many Valentine’s Brunches, barn dances and Fall Harvest hay rides. Evalyn was an exceptional cook, and big family meals were an important part of their family and social gatherings. In December of 2005, a month short of their 55th Wedding Anniversary, life as she knew it changed forever with the passing for her husband, Willard B. “Jack” Naughton. In time, she began to return to the things she loved with her children and grandchildren. Although she began to “downsize” in her home, she always kept the warm and inviting essence of the home they built together. Evalyn is survived by her daughters, Judith Ann and husband Walter Collins, Lori Sue and husband Donald A. Camillo, sons, Jack Russell and wife, Sheila Doris Naughton, and Barrett Blake Naughton, grandchildren, Katherine Lee Grote, Benjamin Chase Camillo, Joshua Scott Camillo, and great grandchildren, Destiny Jillian Lee Collins, Cooper Michael Grote and Carter Nicholas Grote. Grandson, Kyle Nicholas Collins and granddaughter, Sawyer Elizabeth Camillo preceded her in death. Services, administrated by Denton Funerals, will be held on Saturday August 3, 2019 at Denton Bible Church in the Chapel. Visitation will be held at 1pm, followed by the service at 2pm and burial at Roselawn Memorial Park Cemetery in Denton, TX. In Lieu of Flowers, family suggests donations to Alzheimer’s Association or American Cancer Society.

The family of Mary Evalyn Naughton created this Life Tributes page to make it easy to share your memories.

Mary Evalyn Naughton, of Denton, TX, passed away peacefully on...