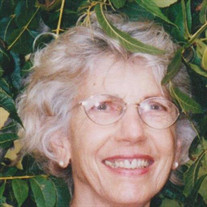 Mina Mae Hill (nee Griffey), 83, died Monday, February 22, 2016 at her residence, Wheeler Place in Gainesville, Texas. Mrs. Hill was born February 1, 1933 in Houston, Texas. She and James Hill were married November 24, 1956 in Houston, Texas. She was a member of the First United Methodist Church of Van Alstyne, Texas where she taught for numerous years her Sunday School of 3rd - 5th graders named the Jivin Jeremiahs also the clown ministry in which she was proud of; Argyle Methodist Church, Argyle, Texas where she was an active member in Bible Study and Prayer Partner to many. She was proceeded in death by her Mother, Mary Pauline Griffey; her Father, James Henry Griffey,Sr. and a Nephew, Michael Lynn Griffey. She is survived by her husband of nearly 60 years, James Howard Hill, Son, James Howard Hill, Jr., of Gates, North Carolina and his wife Tammy, a daughter MaryAnn Berry of Gainesville, Texas and her husband, Steven, a brother, James Henry Griffey,Jr. and his wife Oma, precious Grand-daughters, Victoria Hampton and her husband Benjamin, Christina Berry and Mikayla Hill, many precious nieces and nephews. Memorials may be made to Ardent Hospice, 700 Parker Square, Suite 105, Flower Mound, Texas 75028. Funeral Service will be Saturday, February 27, 2016 at 11:00 AM, at Denton Funeral Home Chapel. Officiating is Pastor Eddie Johnson. Arrangements under the direction of Denton Funeral Home. Online condolences may be left for the Family at www.dentonfuneralhome.net

The family of Mina Mae Hill created this Life Tributes page to make it easy to share your memories.