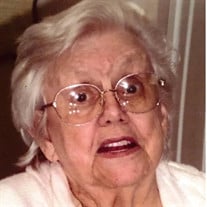 Perma Lou Byrd 90, passed away on Monday July 25, 2016 in Denton Texas. She was born September 10, 1925 to David Edward Cole and Hilda Montana Brannon. Perm married Lawrence Everett Henderson on June 26,1945, Larry died in 1948 when his plane went down at sea. Perma married Kenneth James Byrd Sr on February 04, 1950. She began work in 1965 in the food service at Central State Hospital in Norman Oklahoma till she retired on March 1,1985. Perma Loved going to nursing homes with her Brothers and Sisters to sing for others, and loved being with family. She was a loving Mother, Grand Mother, Sister, Aunt and Friend who will be greatly missed by all who knew her. Perma is survived by Son Larry Don Henderson and wife Elena from Kyle Texas, Daughter Barbara Sue Byrd from Argyle Texas, Richard Eugene Byrd and wife Donna from Tuttle Oklahoma, Sister Cora Wright, Brother Roy Cole and wife Janice, Sister Melba Winkenweder and husband Wink, and Brother Grady Cole and wife Beverly, 10 Grand Children and 9 Great Grand Children. Perma is preceded in death by her Daughter Mona Kayleen Johnson, Husband's Larry Don Henderson & Kenneth James Byrd Sr., Son Kenneth James Byrd Jr., and Brother David Cole. We would like to Thank Rosa Perches for the wonderful care that she and all the staff of Precious Homes, provided to Perma in the last 8 years. We are truly Thankful for each one of you, Perma Loved you all!! Memorial service will be held at Woodland Hills Baptist Church at 313 South Highway 76, Newcastle, Ok 73065 on Saturday August 6, 2016 at 11:00 am. Interment will be at Resthaven Memory Gardens Cemetery Oklahoma City, Oklahoma Condolences can be left www.familyowned.net for Perma's Family.

The family of Mrs. Perma Lou, Byrd created this Life Tributes page to make it easy to share your memories.