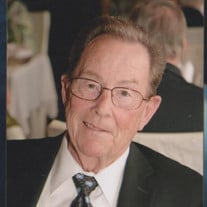 Richard Hugh Howarth, 79, of Denton, Texas, died Thursday, November 26, 2015, at Texas Health Presbyterian Hospital Denton, following a short battle with lung cancer and stroke. He leaves his wife of two years, Rosalyn Wilson, his eldest son, Robert Howarth and his wife Linda Frieder and Robert's son, Jeffrey, his youngest son, James Howarth, his wife Gina and their daughters Camilla and Naomi, his cousin, Susan Giboney and many close friends. Dick was preceded in life in 2011 by Katherine (Perrin) Howarth, his wife of 53 years. Dick was born August 17, 1936 in Los Angeles, California to James and Ethel (Huff) Howarth. He graduated from Monrovia High School. Dick served as a Yoeman in the United States Navy and attended Pepperdine University. He married Katherine (Kay) in 1958 and eventually settled in Downey, California where they raised their two sons. Dick followed his father into mechanical contracting, working for Hickman Bros., Inc., Johnson Plumbing and Natkin & Co., where he retired as Vice President and Chief Estimator in 2002. Dick and Kay moved to the Robson Ranch community in Denton that same year. In the thirteen years they lived at Robson Ranch, Dick perfected his golf game and he and Kay grew to know and love many wonderful people, including Rosalyn Wilson, whom Dick married in 2013. Together they enjoyed traveling and making a home together. Dick gave of him time to the Presbyterian Church and Big Brothers of Los Angeles; he was a member of the Plumber and Pipe Fitters Union. He will be well remembered as a man of faith, a devoted husband, loving father, a wonderful friend and a kind person to anyone he met. A celebration of Life is planned for January 23, 2016 at the Robson Ranch Clubhouse. Enrichment at the Dallas-Fort Worth National Cemetery will be private. Memorial contributions are welcome and can be directed to either World Vision or the American Cancer Society.

The family of Richard Hugh Howarth created this Life Tributes page to make it easy to share your memories.