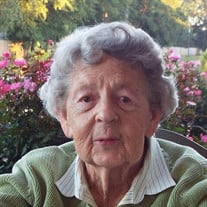 Shirley Dieterich was born in El Paso, Texas, on May 24, 1925 to Arthur F. Dieterich, Sr. and Louise Caillet. Shirley passed away on April 29, 2017, at the age of 91 years. Her family moved to Dallas, Texas, in 1928 and established Hermosa Farms Dairy at the corner of Midway Rd and Forest Lane. She attended Walnut Hill Elementary School and was valedictorian of the 1942 graduating class of Vickery-Hillcrest High School. She graduated from the University of Oklahoma, Norman, in 1946 with a BS degree in Chemistry. After working several years for the Agricultural Extension Service lab in College Station and the lab at Southwestern Medical School in Dallas, she married Dr. Clu Flu Lusk at the family’s dairy farm in Grayson County, Texas, on June 17, 1950. After a year each in Shreveport, LA, Pineville, LA and Weimar, TX, the family settled in Gainesville, TX in 1953. The 50’s through 80’s were devoted to raising her family and supporting the children’s Boy Scouts, Camp Fire Girls, and band activities. Shirley was an Elder in the Presbyterian Church, an active member of First Presbyterian Church in Gainesville, and was a government meeting observer for the local League of Women Voters. The great-great niece of botanist Julien Reverchon and the niece of Louisiana iris advocate Marie Caillet, Shirley has followed their footsteps working for the identification and preservation of Texas native plants. In the 90’s she embarked on a self-study of Botany, was a founding member of the Native Plant Society of Texas (NPSOT) and contributed to the Botanical Research Institute of Texas (BRIT). Among her many projects was the plant list she composed for Cooke and Montague Counties, collection of plant species from these counties for the BRIT Herbarium, and plant identification and location expertise for farmers/ranchers and researchers including contributing to the book North Central Texas Wildflowers. In October 2012 Shirley received the NPSOT Charles Leonard Weddle Memorial Award for lifetime achievement in the field of Texas native plants. She received this award for volunteering, identifying, collecting and teaching about the native plants of the north Texas region. She was a Master Naturalist and a member of the Trinity Forks Chapter of NPSOT. Shirley was preceded in death by her parents and her former husband, Dr. Lusk. She is survived by her sister, Nancy Kurrus (Fred) and her brother, A. F. “Buddy” Dieterich, Jr. (Nancy). She is also survived by her five children: Fred Lusk (Barbara), Alan Lusk (Terry), Jane Sears (Dwight), John Lusk (Katherine), and Claire Morris (Mike). Surviving grandchildren are Jennifer Mir, David Lusk, Patrick Lusk, Catherine Lusk, Kevin Sears, Jason Sears, Gus Mask, Elena Lusk, Kristen Morris and Elissa Morris. Great grandchildren are Tanya Mir, Ahmed Mir, Arthur Sears and Lily Ernst-Mask. Shirley moved to Denton in 2000 and was a member of Trinity Presbyterian Church there. A memorial service will be held at Trinity Presbyterian Church, 2200 N Bell Ave, Denton, TX 76209 on Friday, May 19, 2017 at 1:00PM, the Rev. Craig Hunter officiating. A reception at the church will follow. In lieu of flowers, memorials may be made to Trinity Presbyterian Church, the Native Plant Society of Texas at PO Box 3017, Fredericksburg, TX 78624-1929, or Thomsen Foundation at 4528 County Rd 398, Decatur, TX 76234. Condolences may be offered at www.dentonfuneralhome.net.

Shirley Dieterich was born in El Paso, Texas, on May 24, 1925 to Arthur F. Dieterich, Sr. and Louise Caillet. Shirley passed away on April 29, 2017, at the age of 91 years. Her family moved to Dallas, Texas, in 1928 and established Hermosa... View Obituary & Service Information

The family of Shirley Dieterich Lusk created this Life Tributes page to make it easy to share your memories.