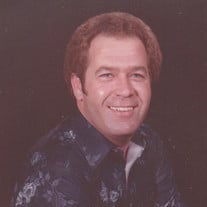 Terry E. Nichols, 71, passed away January 5, 2015 after a long struggle with health problems. A memorial service will be held at a later date in Duncan, OK where his ashes will be interred. Terry was born on April 11, 1943 in Flora, IL. He graduated from high school in Raceland, LA in 1961 and served in the US Air Force for 4 years. He retired from Bell Helicopter, Ft. Worth, in April 2005 after 36 years. He married his wife, Dorothea, in September, 2000. Terry was an artist and an avid sportsman. The art was for fun, the sports were serious, whether he was playing a game or watching one on TV, playing on a golf course, or fishing in his boat. He was loved by his family as he loved each and every one of them. He was Grampy to his grandchildren and a few of his friends. Terry will be missed. He was preceded in death by his parents, Bert and Harriet Nichols of Duncan, OK; a brother, Jerry; and a sister, Peggy. He is survived by his wife, Dorothea J. Nichols of Justin, TX; a daughter, Angela Lancaster and her husband, Todd, of Coppell, TX, a son, Chris Nichols and his wife, Lindsay, of Grapevine, TX; two stepdaughters, Leigh Ann Gooch and her husband, Robbie, and Diana Lamar, both of Amarillo, TX; his grandchildren Jonah, Ben, and Kansas Lancaster, of Coppell, TX, Kaelyn and Barrett Nichols, of Grapevine, TX and a step-granddaughter Rachael Kidd and her husband, Dustin, of Amarillo, TX; two brothers, Jerry Lee Messersmith and his wife, Yvonne, of Duncan, OK and Ted Nichols and his wife, Margie, of Dallas, TX; a sister, Kay Morgan and her husband, Wendell, of Yukon, OK, a sister-in-law Ronda Kay Gentry and her husband, Ed Burrow, of Portales, NM; nieces, nephews, grandnieces, grandnephews and friends. If you would like to make a memorial donation, please send it to Texas Wounded Warrior, 4301 Fillbrook Lane, Tyler, TX 75707 or online at www.txwoundedwarrior.com. Arrangements are under the direction of Denton Funeral Home & Cremation Services.

Terry E. Nichols, 71, passed away January 5, 2015 after a long struggle with health problems. A memorial service will be held at a later date in Duncan, OK where his ashes will be interred. Terry was born on April 11, 1943 in Flora, IL. He... View Obituary & Service Information

The family of Terry Eugene Nichols created this Life Tributes page to make it easy to share your memories.