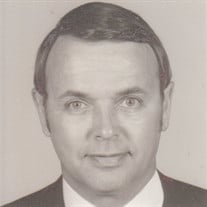 W. Walter Jaderlund passed away at the age of 88 on Thursday, September 11, 2014, due to complications arising from Parkinson's and Alzheimer's. He was born July 29, 1926, to John Arthur Jaderlund and Emma Meyer Jaderlund in Mt. Vernon, NY. He had a loving sister, Mildred, who predeceased him. Walt was a voracious student, graduating from Rensselaer Polytechnic Institute with an Aeronautical Engineering degree at the age of 24, after serving in the U.S. Army Air Force. He later earned an MBA at U of CO, Boulder. He left New York to take a position in Ft. Worth, TX at Convair, which became General Dynamics and is now Lockheed, where he worked passionately in the design and testing of jet engines. It was in Ft. Worth where Walt met the love of his life, Moddy, whom he would marry and raise two sons, John and David, who have always been his pride and joy. Walt heard the call of the space race in 1961, and accepted an engineering position at NASA, near Houston, TX where he would spend the next 30 years devoted to designing and testing spacecraft for the Gemini, Apollo, Spacelab, and Shuttle programs, which required extensive travel. As much as he loved his work at NASA, Walt loved the outdoors, and spent as much time as he could on his boat fishing in the Gulf of Mexico, snow skiing in Colorado, hunting at the ranch in Dripping Springs, and leading Boy Scout troops as Scoutmaster. Always very devoted to his church, St. Christopher's in League City, TX, Walt was active as a Vestryman, Jr. Warden, Sr. Warden, Usher, Greeter, Director of Acolyte Training, and numerous repairs/maintenance. Walt retired from NASA in 1993, and moved with Moddy to Granbury, TX where they built a home, and enjoyed fishing Lake Granbury together, along with Moddy's sister and brother-in-law. They moved to Arlington, then Flower Mound, where he would live until his health issues worsened. Walt is survived by his loving and tirelessly dedicated wife, Moddy; their two loving sons, Dr. John Jaderlund of Denton, TX and David Jaderlund of Santa Fe, NM; an adoring granddaughter, Sarah Jaderlund who is an engineering student at Purdue; also by Mildred's sons, Gary and Steve, and her daughter, Joyce. Walt will also remain in the hearts of Moddy's family who loved and admired him as their own. There will be a memorial service at Chinn's Chapel, 100 Chinn's Chapel Lane, Copper Canyon, TX on September 20, at 1:00 p.m. You are invited to sign the Guestbook at www.dentonfuneralhome.net For those wishing to make a donation in memory of Walt, the family requests that memorial gifts be made to Alzheimer's Association, 4144 N. Central Expressway, Suite 750, Dallas, TX 75204; or a charity of your choice, in lieu of flowers.

W. Walter Jaderlund passed away at the age of 88 on Thursday, September 11, 2014, due to complications arising from Parkinson's and Alzheimer's. He was born July 29, 1926, to John Arthur Jaderlund and Emma Meyer Jaderlund in Mt. Vernon, NY.... View Obituary & Service Information

The family of Walt Jaderlund created this Life Tributes page to make it easy to share your memories.

W. Walter Jaderlund passed away at the age of 88 on Thursday,...