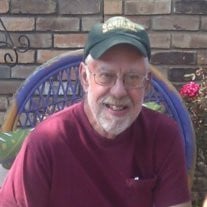 William Ray “Bill” Phillips Born 9/1/43, Denton, TX, and passed away at home December 30, 2013. The family thanks the staff of Presbyterian Hospital and Ann’s Haven VNA for their compassionate care of Bill. Bill was preceded in death by parents Clarence and Marjorie Phillips, and sister Margaret Phillips. He was a smart, thoughtful and courteous man whose favorite phrase was “There’s always a way.” When he talked, you listened. He loved his immediate and extended families, and will be dearly remembered by his wife of 39 years, Susan McGowan Phillips; sister-in-law Vicki Malley; brother-in-law Andy McGowan and wife Marlene Mendel; nephew Tony Malley, wife Michelline and great-nephew Aaron; niece Lara Malley Shankle, husband Steve and great-niece Madison; and cousins Robert and wife Elaine Edwards, Donald and wife Patricia Edwards, Elizabeth and husband Roger McSween, William and wife Andrea Edwards and their families. He is missed by his precious pets Ralph, Blossom and Jammers. Bill grew up in Denton, graduating from Denton High School in 1961. He was hired by the Plano Public School system as assistant band director to Emmitt Clem after graduating from North Texas State University. At Plano’s Williams High School the stage band Bill created to play during basketball games soon became part of the curriculum. He transferred to the new Plano Senior High in 1975, and later designed music history classes and a music theory program for the school. Bill and his music theory students were successful in AP ARTS, the O’Donnell Foundation Advanced Placement Incentive Program. He worked with the PSHS Theater Department on music for “Joseph and the Amazing Technicolor Dreamcoat“ and on set design and construction for “Little Shop of Horrors”. Teaching awards include the 1997-98 Award of Excellence from UCSD’s Outstanding Teacher Recognition Program, and the 2004 Mirabeau B. Lamar Award of Excellence from Plano Lodge No 768. Bill was proud of and thoroughly enjoyed his 38 years in Plano. He relished helping students understand and enjoy music, enabling them to create their own music and encouraging them to empower themselves by learning new skills, whether in music, creative thinking, power tools, working as a team or leading one. Bill was a most interesting man who found adventures in everyday events. His interests ranged from woodworking to beekeeping to working in his garage and beyond. He was a professional musician who sang and played keyboards and clarinet. Bill was a lifelong hunter and enjoyed the camaraderie of two great groups of hunting buddies for 20+ years. Bill and Susan enjoyed treasure hunting and he twice served as president of the Golden Triangle Explorers Society. They enjoyed camping on their own land and in Texas state parks and took their vintage Airstream on prospecting trips to Gold Prospectors Association of America claims. Memorial visitation will be Friday, January 31, 5-8 pm at Denton Funeral, Denton Tx. In lieu of flowers, please consider donating to Ann’s Haven VNA, the American Cancer Society or a charity of your choice. A private, family graveside service will be at Denton’s Roselawn Cemetery.

William Ray &#8220;Bill&#8221; Phillips Born 9/1/43, Denton, TX, and passed away at home December 30, 2013. The family thanks the staff of Presbyterian Hospital and Ann&#8217;s Haven VNA for their compassionate care of Bill. Bill was preceded... View Obituary & Service Information

The family of Mr. William Ray Phillips created this Life Tributes page to make it easy to share your memories.