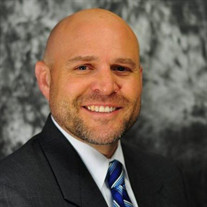 John Mark Thrash, 44, devoted husband, father and son, passed away in the comfort of his family home in Argyle, TX on June 15, 2016 after a courageous battle against cancer. Mark was born on Ft. Wolters Army Base in Mineral Wells, TX on June 22, 1971 to John and Eileen Thrash. Mark adored his wife and family like no other. He spent his years, coaching little league sports in the early years, leading his boys in Boy Scouts, treating his girls to Daddy Daughter Date Nights and Dances, encouraging each of the kids’ musical talents and shaping them all into the strong, loving and Christ-centered individuals they are today. Whether camping, vacationing, playing games around the dinner table, spending date nights or weekend trips with his wife or just having a laid-back movie night, Mark loved spending time with his family. A competitive gymnast from early childhood and through his high school years, Mark was a proud alumnus of L.D. Bell High School and Texas Tech University. A Red Raider through and through, Mark served as Chapter President of Theta Chi Fraternity and gained his degree in Hotel Restaurant Management. Following a short time as manager of Houstons Restaurants, Mark answered his call to Youth Ministry where, through his gift of music, he began connecting with students by way of his guitar and vocal talents. Mark’s students were drawn to his magnetic, humorous and often edgy personality, which enabled him to garner their trust and lead them to a relationship with Christ. Throughout his years in ministry, Mark was a Radio DJ, avid writer and motivational speaker for Purpose Driven Youth Ministry. Following his ministry, Mark continued to cherish his ongoing relationships with former students, mentoring and marrying them into their adult years. Beyond his ministry years, Mark navigated a successful career in the medical industry, first as a Senior Client Manager at Phytel, Inc. Fueled by his self-directed drive for excellence, Mark became Director of Operations for Medical Edge Healthcare, Regional Director at Texas Health Resources, Chief Operations Officer at Health Net, Relationship Development Manager at Physicians Choice Laboratory Services and finally, Founder and CEO of his own Texas Health Elite. Outside his professional career, Mark was a Master Mason, brown belt in Isshinryu Karate and served as former School Board Member of Crowley ISD. Although Mark realized many successes throughout his years and in his career, he never lost sight of what remained most important to him - his God and his Family. To say Mark was a high-energy individual would be an understatement and he directed this energy towards loving his family and all with whom he crossed paths. Unaware of his impact on others, Mark effortlessly poured himself into the lives of those around him, inspiring others along his way. Regardless of whether he met someone once or knew them for a lifetime, Mark never missed a birthday and never knew a stranger. He was a light of laughter and love, dealer of hope to the world and never missed an opportunity to share his faith with ease and grace. Mark was a rare gem, an extraordinary man among us. His impact on our lives will not be forgotten and will live forever in the hearts of his beloved wife of 20 years, Tracy, children Ashley and husband Justin, Mason, Marshall, Micah and MacKenzie, his parents, John and Eileen Thrash, sister Becky and husband Dan, mother-in-law Carole, sister-in-law Carmen, nieces Madeline, Jordan and Emily, nephew Jordan, loving aunts, uncles, cousins and countless extended family and friends. A celebration of life will take place Tuesday, June 28, 2016, 2:00 PM, at Cross Timbers Community Church, 1119 South US Hwy 377, Argyle, TX 76226. Pastor Jason Sowell will officiate. In lieu of flowers, the family requests donations be made to Current Initiatives, The Laundry Project at www.laundrybycurrent.org/give/ Arrangements under the direction of Denton Funeral Home. Online Condolences may be left for the Family at: www.dentonfuneralhome.net

John Mark Thrash, 44, devoted husband, father and son, passed away in the comfort of his family home in Argyle, TX on June 15, 2016 after a courageous battle against cancer. Mark was born on Ft. Wolters Army Base in Mineral Wells, TX on June... View Obituary & Service Information

The family of Mr. John Mark Thrash created this Life Tributes page to make it easy to share your memories.